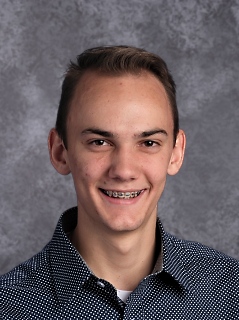 Devon is our Sprints/Hurdle/Team captain. He started running track for me his freshman year. He was one of the fastest freshmen in the state in the 400m. If you’ve ever met Devon you know he is full of confidence in his abilities, some people might take this as arrogance, and at one point it might have been. His first day at practice he walked right up to our fastest runners and told them he would be beating them before the end of the year (he did not, but wasn’t far off). I spent a lot of time that year explaining the difference between confidence and arrogance. I can tell you Devon is one of the humblest athletes I have ever coached. He is also one of the hardest working athletes I have ever worked with, and I believe this is where he has gained that confidence.

He now spends most of his time at practice working with the younger athletes helping them become better. When he sets a goal for himself he will not stop until he achieves it. His work ethic has shown on the track, currently he is ranked #1 in state in the 110 hurdles and 300 hurdles. Everything Devon does he puts his all into, this year he competed in Dancing With The Bear River Stars and won. It has been a pleasure of mine getting to know and coach this fine young man, I know he will accomplish great things in his life if he continues his passion to be the best at what he does, and his desire to serve others and help them become better.

He plans on serving a mission and on returning will hopefully continue his running at one of the many colleges that are interested in him currently. I would just like to personally thank Devon for the great example he is.

Coach Hurst has done an excellent job painting a picture of the many things that make Devon so great!  It has been such a pleasure to watch him work extremely hard these past four years to be the best hurdler in the state.  I remember his sophomore through senior years I would be working in the BEAR Center very early in the mornings and Devon would come in on his own and with his coach and work on his technique as well as his conditioning and strength.   Many people throw around the phrase, “hard work pays off” but Devon epitomizes this phrase.

While working so hard to be a great runner he has also been very involved in the Madrigals and taken a very rigorous academic schedule, taking many AP and college classes.  While doing this he has maintained a 3.6 GPA.  What really has stood out to me about Devon, in addition to his hard work, is the maturity that he shows as I have worked with him and the integrity that he has demonstrated.  He always is so respectful and kind to me, always going out of his way to say hi.

As I read his coaches write-up what really stands out to me is how he is always helping the younger runners.  The sign of a great leader is someone that passes on their talents, knowledge, and skills to others.  Devon thanks for being such a great example of the type of athlete we hope represents our school and community.  I am looking forward to watching you have many great success in the future.