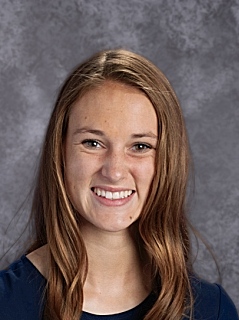 Madison White has been nominated athlete of the month at Bear River High School.  Madi is a junior and participated this fall for the Lady Bears Cross Country team and served as the teams varsity captain. Madi had an historic year both individually and as part of the varsity team. Madison medaled at the prestigious Cache Box invitational finishing 7th and helping the Lady Bears to their second consecutive title which was a first in school history.  Madi followed that up by running the fastest time in school history at Region.  Her time of 19:13 put her on the top of the podium with her first region title ever. Her finish coupled with that of her teammates, gave the girls from Bear River their third ever Region title and marked the first year in school history where the girls won both the Cache Box and Region titles.  A week later at state, Madi crushed her own state record by 37 seconds, becoming the first girl in school history to break the 19 minute mark (18:59) in either a 5k or 3 mile race.  Her 5th place finish at state earned her medalist honors and was the second best placing by a girl from BRHS at the Utah State Cross Country Championships.  At the conclusion of the race, Madison and her teammates were awarded the 4A Girls State Cross Country Academic Championship, as the girls averaged a combined 3.95 GPA.

Madison has her sights on great things next year for herself and her team.  Madison also competes in track. She is a three year letter winner and is the daughter of Jared and Kim White of Tremonton.

It is a real pleasure to recognize Madison White as the female student athlete of the month. If you were to see Madison in the halls of Bear River you wouldn’t guess this quiet, petite and pretty young lady would be such a fierce competitor but as I watched her at the Region Championships I saw just what a determined competitor she is. I had the pleasure of coaching Madison’s Dad and I saw the same grit, toughness and competitiveness in Madi as I saw day in and day out from her Dad. At the Region XI championships I had a great and lasting memory made thanks to Madi. I happened to be helping at the finish line as Madi came across the finish line in first place and then just collapsed. So I helped take her out of the way as other runners where coming. She was disoriented and couldn’t walk but as her Dad came up she looked up at him, smiled and said, “Dad I got a gold medal!” I choked up as this athlete showed what high school sports are all about. She uses the same work and determination in the classroom as she has maintained a 4.0 throughout her high school career!

Thanks Madison for being such a great example to everyone at Bear River of hard work, humility, kindness, dignity and class! I wish you the very best the rest of your high school career and throughout your life!