The Lady Bears traveled to Stansbury last Tuesday, November 26, to battle the Stallions.  The Freshmen and JV teams came away victorious where the Sophomore team lost by one in overtime and the Varsity lost by 13 in a 21-36 final score with Stansbury.

The Bears came out with a lot of fire for their first two halves of competition with Stansbury.   The Bears tough press proved difficult for Stansbury.  Early shots by Ashley Roberts in the first quarter held the Bears in the lead.  The Bears caused a 53% turnover rate in the first quarter.  Deflections by Rheagan Hartfiel, Ashley Robers, Mckenzie Bywater, and others propelled the Bears into the second quarter with some momentum.  The second quarter brought more turnovers for the Stallions.  The Bears continued to play tough defense and gained a little traction offensively.  They outscored the Stallions by 8 leading into the half.  “I felt like our defense was superb during the first half,” said Coach Neal.  “We struggled to convert all of Stansbury’s turnovers into points, however.  We should have been up by 20 going into half time.”

The second half was much different for the Bears.  Stansbury intensified their press.  The Bears fell into a 63% turnover rate in the third quarter.  The quarter proved to be their demise as they scored one three-pointer by Mckenzie Bywater the entire quarter.  Their defense also proved sluggish.  The Bears gave up 19 points to Stansbury.  Coach Neal commented, “The third quarter was the determining factor of the game.  We came out sluggish, did not play defense, and allowed Stansbury to press us.  We threw weak passes, did not come to the ball, and looked like we did not want the ball.”  The fourth quarter was better, but the Bears were so far behind, that they could not make up much ground against the Stallions.  They still struggled with Stansbury’s press, setting an offense and working the ball to the post.  The game was a good season opener, showed the Bears some strengths and weaknesses, and set the stage for another upcoming week.

The Bears travel to Orem on December 3 to take on the Golden Tigers.  The Bears will need to work on transition points, tougher defense, and ball-handling in order to limit turnovers and be competitive with the Tigers.

The Bears then host Merit Preparatory Academy on Wednesday, December 4 at 6:00 pm for their first home game. 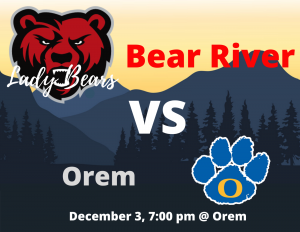