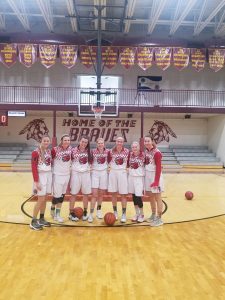 The Bear River Girls Basketball team spent much of their winter break on the road.  The team traveled to Star Valley, WY, where they competed against Star Valley High School, Thunder Ridge High School, and Ririe High School.

The Bears struggled to gain traction on the first day of the Star Valley Tournament.  Sugarplums were still dancing in the team’s head as they struggled to compete defensively against Star Valley. The game brought some scoring against these difficult teams, but an overall poor performance that left the Bears behind as the final buzzers.  However, the Bears were able to pull 15 points off of Star Valley’s forced turnovers.  The Bears ended the game with 26 turnovers themselves, a detrimental statistic on their efforts to win.

On Saturday, the Bears faced Ririe ID.  The team seemed more ready to play and were able to battle to a quick lead in the first quarter.  Filer had just upset Green Canyon on Friday, so the Bears were nervous to play, but they battled and fought for the win.  Major contributions from more players were key in the Bear’s victory.  An entirely different defensive attitude came from the team as they battled in each possession.  Movement, talking, and smiles allowed the Bears to relax and do what they typically do against good teams.  It was great to have the Bears back on the court!

On December 30, 2019, the Bears traveled to Morgan in a rescheduled game against the Trojans.  The Bears jumped to a quick lead with contributions from M. Bywater, O. Taylor, M. Lorimer, and A. Roberts.  The Trojans battled back with a quick three and a couple of twos to leave the score tied at the end of the 1st quarter.  The second half brought foul trouble for Morgan.  The Bears went to the line and shot 10/13 in the second quarter.  The team kept Morgan at bay for another quarter, but after another three-pointer and several twos, the Bears could only hang on to a one-point lead going into half time.  During the third quarter, the Bears could not keep up with Morgan’s three-point shooters.  They worked well with keeping their shots off-balance and rushed in the first half, but Morgan was able to hit four three-pointers in the third quarter that buried the Bears.  Their 27 points to the Bears 16 points in the third proved to be their downfall.  The fourth quarter brought more free throws for the Bears.  They shot 9/11, but it was not quite enough to regain the point stretch in the third quarter.  Morgan added three more three-pointers to continue with the momentum.  A strong press and a run brought the Bears to within four points with 2 minutes remaining, but Morgan shot 5/6 in free-throws down the line to win the game.  Bear River played their hearts out.  They brought a lot of intensity, excitement, and determination to the game.  They worked very hard to end their four games in a row on a high note.