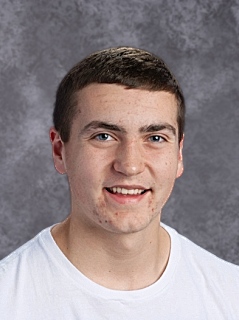 Mark Huber is a SR guard, team captain, and 4 year varsity starter for the boys’ basketball team. He is an extremely hard worker who demands the best from himself and his teammates at all times. He is a great example of hard work and dedication in both the classroom and on the basketball court. Mark never shies away from a challenge or from extra work and his hard work seems to be contagious within our program.

Mark averages 22.3 points a game and is currently the second leading scorer in the state. He is also one of our team leaders in both assists and rebounds proving that he is also a great team player that is willing to chip in wherever needed in order to win. Mark is also one of the nation’s leaders in free-throw percentage at just over 90%.

While Marks stats on the court are impressive his effort in the classroom is extraordinary. Mark maintains a 3.976 GPA and exceptional attendance while helping lead the basketball team. He is a great example and leader for our school and for our program.

Mark Huber is the epitome of a student athlete. He is a great student and a great basketball player and what more is he is even a better all-around person. I have known Mark the majority of his life and have watched him practice innumerable hours on the fundamentals of basketball as he has always loved the game and set high goals and then worked incredibly hard to achieve those goals. When he was in my health class he was impressive, not only with his intelligence but with his genuine kindness, humility and respect he had for everyone. As my aide as Athletic Director I have had him do numerous tasks in helping me get things set up for various sports and seasons and I have never seen someone of his age that listens so well and then carries out the task with a smile and a great attitude. He is also unique in that he has great initiative. He will just jump in and do something that needs to be done without even asking. One of the greatest compliments I could give Mark is as a father and athletic director I can honestly say Mark is the kind of young man I would want coaching for me or dating my daughter if I had any daughters left. It will be fun to watch Mark go through his life because I can guarantee he will be a success at whatever he does. I wish Mark all the very best! I will always consider him a great friend and example to me.